We have an older machine room that has been through many years of equipment changes.  As a result, it doesn’t have *ahem* optimal cooling systems.  Some of our more active systems have been having cooling issues recently, and here’s what we did about it.  Maybe Santa will buy us real HVAC someday.  (On a more serious note, Cal Poly’s budget is in really bad shape.  What we get from Sacramento is not sufficient.  So when time are tough, you sometimes have to resort to cardboard and duct tape.)  Read on to see the gory details…. 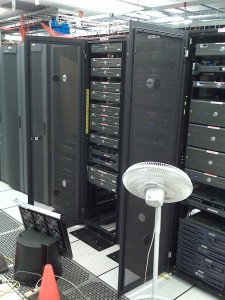 These are some of the racks with hot servers.  These “temporary” fans have been like this for weeks (months now…).  The cluster of small fans falls over flat on the floor every couple of days.  The servers it is blowing on immediately complain afterwards of being too hot.  So we go prop the fans up again. 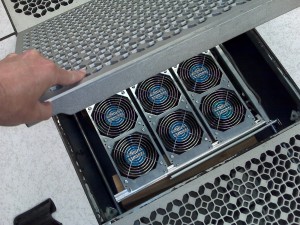 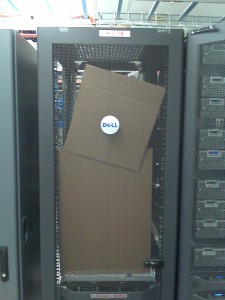 When we suggested that maybe putting some blank panels into the racks would help separate cold air from hot air, this is what we got. 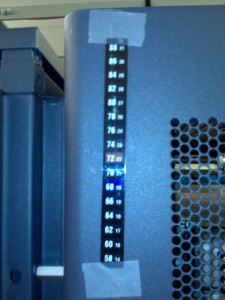 We don’t have any automatic systems to monitor environmentals.  We do, however, have these fish tank temperature strips hanging up all over the place.  If we had someone tasked to go and record the temperatures at various times at different locations and collate that together in a useful way, that’d be alright, I suppose.  But we don’t.  They are basically up for show, so when we ask “Hey, wouldn’t some sort of monitoring system be a good idea?” we are told “But we have the temperature strips…”