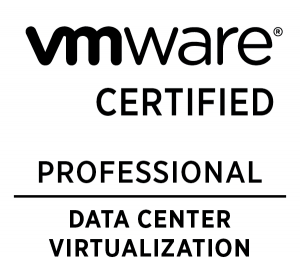 I spent about 3 months in dedicated preparation for this exam (Dec 2014 – Feb 2015), mostly at home, something like an hour a day, 5 days a week. During the week, I used CBT Nuggets and practiced with my home lab (more below). On weekends, I did lots of practice exams, probably at least a couple of hours, every weekend. I’m too busy and too distracted to do much studying at work. So you can do the math, but I spent many hours on getting ready for VCP550. I’d say between buying the server and all its components, CBT Nuggets, VMUG Advantage, licenses, books, and practice tests, I spent something like $2000 on getting ready for this test.

I was already a VCP3 and VCP4 (took classes and passed the exams).  About a year ago, VMware changed their policy and now all certifications expire.  For people like me that have had their (non-expiring) certifications for a while now, they magically set an expiration date of 10 March 2015.  If we do not pass a test, like VCP550, by this date, then all previous certifications are null and void.  In effect, you will have no certifications.  Since VMware requires non-certified people to take an official class in addition to passing a test, this in effect meant that if you do not recertify by 10 March 2015, you start over from scratch and you will have to take your class again.  Yow, pretty harsh.

Note also that I have some experience with the exams for VCP510 (for vSphere 5.1).  I have taken this twice, and failed it twice.  The first attempt was a spur of the moment thing at a VMworld conference a couple years ago, when they were basically giving it away for free and I thought “Why not?”  I barely failed, missed it by just a couple of questions.  I then took it seriously, got the books, digested the Exam Blueprint, did the VMware mock exam, studied for a couple of months, and took it again (now with serious preparation invested).  I failed it again, and got the exact same score as I did cold.  These are not trivial tests.

To prepare for the test, the first and most important thing I did was USE THE PRODUCT.  I’m a daily ESXi user.  I have multiple production HA/DRS clusters running on NFS and iSCSI storage.  We have something like 50 physical hosts and over 2500 VMs.

In addition, I built a robust home lab, and am able to run a full blown vSphere implementation with vCenter, 3 ESXi hosts, and the bells and whistles to practice with.  More on this below.

Somehow, at some point, I got on the mailing list for the video instruction company CBT Nuggets, and they occasionally sent me invitations to try their training.  I thought maybe I’d try them for vSphere review.  They have a policy for a 7 day free trial, and after that you can subscribe after on various plans.

They have a class named VMware vSphere 5.5 VCP5-DCV that is intended for VCP550 test preparation. This is 40 videos, lasting 18 hours.  The various Nuggets (videos) cover most of the topics from the VCP550 Exam Blueprint.

It turns out that particular class is freaking awesome! In fact all my experience with CBT Nuggets has been very positive. Keith Barker is a very upbeat, pleasant, and knowledgeable instructor.

Probably the best part of the course is that Keith takes you step by step building an inexpensive home lab using VMware Workstation. So if you do what he suggests in the course, you will build a complete home lab to practice on.

I bought an inexpensive “office” style TS140 Lenovo server from Amazon. These are available very inexpensively, and they take 32 GB of RAM, which I stuffed it with. I put a large SSD in it for good disk performance, and I am have a fully featured lab and run 3 ESXi hosts, a Windows domain controller, a Windows host for vCenter, and lots of VMs with plenty of room to spare. Having had some experience with running crazy loud servers in previous home labs, my favorite thing about this server is it is whisper quiet. It is basically totally silent. I sit right next to it in a quiet home, and I can’t tell by listening that it is on. No more “Hey honey, what’s that crazy loud fan running in the garage?” type questions.

Since you need VMware Workstation to run the home lab on, I chose to sign up for VMUG Advantage to get the 50% discount on VMware Workstation. You also get VMware’s EVALExperience, which gives you “real” licenses for all VMware products (analgous to Microsoft TechNet) so you don’t have to live within the confines of the usual 60 day trial license for your home lab.

I was originally going to use this blog post to specifically detail out my home lab design with diagrams, shopping lists and so forth, but why bother? Keith at CBT Nuggets has done that all for you already. Just go there and watch the course. Even if you can’t afford it, they give you 7 days free trial, and a motivated person could watch all 40 videos (18 hours total) in 7 days.

I used the official VMware Press book named VCP5-DCV Official Certification Guide (Covering the VCP550 Exam) Premium Edition and Practice Test, 2nd Edition.  The premium edition comes with a practice test.  Sometimes, when you get a practice test bundled with a book, the test is not good and proves to be short or limited.  This test is a great full featured test.  It has hundreds of questions, directly tied to the Exam Blueprint.  The book itself is good, it is laid out in Exam Blueprint fashion, and covers all topics needed. I didn’t exhaustively go through this book, since I had done this not so long ago for VCP510.

Every VMware professional needs a copy of Scott Lowe’s Mastering vSphere. I have an older copy of Mastering vSphere 5, which I had gone through in elaborate fashion when I was studying for VCP510. This time through, I didn’t look at it much. Get the latest version for 5.5 if you use this for test studying. These are great books, I have had one for every version going way back.

There is a VCP5-DCV Practice Exam (free registration required), but I found it to be too beta and too short to be of much use (“wrong” answers-meaning I didn’t agree with them, and beta-ish GUI bugs).  For example, questions that require you to select multiple responses don’t tell you how many are required unlike the real exam.  I emailed the VMware test people a couple of times, but they didn’t seem too interested in my feedback.

It used to be (VCP3 and VCP4) that VMware discouraged test preparation vendors from making VMware practice tests.  There were none.  That now has been changed, and you have some to choose from. (Like I said above, just get the official VMware Press book with exam. That one is totally suitable.)

The official VMware test partner is MeasureUp. As of Feb 2015, they do not have a VCP550 practice test. I contacted them by email asking when VCP550 would be released and customer service replied that they didn’t have one, they weren’t going to have one, and they only release new tests after seeing a lot of customer demand. So I’m not sure why they think there is no demand, nor why the “official” test partner is not releasing test preparation materials for shipping tests from VMware. Whatever, I guess.

I did buy their (stale, deprecated) VCP5-Data Center Virtualization (VCP5-DCV) practice test for VCP510 anyway. These tests are subscription based, and require only a browser, and are done online. The interface is a bit beta and a bit clunky. It was OK I guess, but the practice test that comes with VCP5-DCV Official Certification Guide (Covering the VCP550 Exam) Premium Edition and Practice Test, 2nd Edition is better and is actually for VCP550.

I wouldn’t buy the MeasureUp test again in retrospect. I did take probably 30 or 40 tests, but one of the beta bugs that bit me was that my test history wasn’t saved. I usually take every question a couple of times, and then on subsequent attempts, tell the test engine to only show me questions I have missed. That feature is supposedly in this exam, but since it doesn’t save test history, I couldn’t use it. They say this will be fixed “real soon now.”

All in all, I had a pretty unsatisfactory experience with MeasureUp this time (in the past, I have bought a *LOT* of tests from them, like all 7 exams for MCITP:EA, and previously they had always done a good job.)

Transcender make a (unofficial) practice text as well, VMWare Practice Exam for VCP510 VMCert: VMware Certified Professional on vSphere 5. Like MeasureUp, they do not have a VCP550 practice test as of Feb 2015. I did not buy this. I have used their tests in the past, and they have always done a good job.