I’m glad to have passed 070-640 the first time.  I spent two months on this one.  I read the book.  I actually did all the labs in the book using virtual machines.  I did additional practice on real machines at work.  I took 2 practice exams a day, pretty much every day, for over a month, like probably 80? total practice exam attempts.  (I have MeasureUp exams that came with the book, and I bought Kaplan SelfTest exams as well.  I’d say that if you are like me, that 2 months per exam is about what it takes, and that’s studying an hour or two a day, most days of the week. 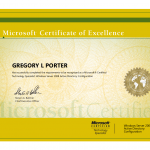 This test is long, longer than any other Microsoft test I have taken.  It has twice as many questions.  I took the test in Bakersfield, at Diamond Technologies (nice place, I’ve been there twice now, probably the nicest test center that is anywhere close to me).  The test proctor sat me down and said “You have 4 hours for this test, good luck.”  I about fell off the chair.  Four hours!  I finished in a little less than three, and that’s with taking the time to go over my answers a couple of times.  Previous exams were more like 90 minutes.

If you’re curious,  I keep all my certifications here.