I have an older HP Compaq tc4200 Tablet PC.  I like it.  If you’ve never used a tablet before, where you can opt to use a pen for input, you should try one.  It’s great for applications that are primarily mouse click driven, like browsing the Intertubes or doing practice exams.

I recently reloaded mine with Windows 7, which was ridiculously easy.  Windows 7 runs no slower on it, and perhaps a bit faster.  Windows 7 natively loads all required drivers, so you won’t spend hours looking for the NIC driver or whatever for this model.  I like Windows 7.

Still as an older machine, it’s a bit slow.  The hard drive seems to thrash.  People say that replacing the internal hard drive with an inexpensive solid state drive (SSD) helps.  Will it make any real difference?  Yes.  I did it, and I’m glad I did.

Here’s what it looks like running, after about an hour: 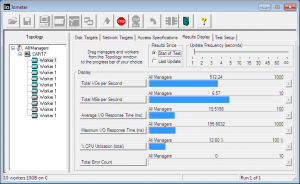 I then replaced the Travelstar with a Transcend TS64GSSD25-M 2.5″ 64GB PATA MLC Internal Solid State Drive (SSD).  I got it for about $200 at Newegg.  I loaded Windows 7 and iometer on it again.  Yes, it is something like 50% faster on the simple things I timed.

Note that benchmarking SSD’s is notoriously inaccurate, basically because SSD makers know you’re going to do it, and tweak the SSD’s so they behave very well in the first few minutes.  They know the average person will probably do some quickie benchmark on the SSD in the first few minutes of use, so they make sure the SSD is configured to respond quickly during initial use.

You can get past this by running the benchmark for a few hours, at least 8 hours or overnight.  If you watch the results over time, you’ll see the SSD performance drop by 50% or more from the initial numbers.  Of course the initial numbers are what the manufacturer puts in the specs and on the box.  Basically, they lie.  For example, Transcend says this device gets 50 MBs per second for writes.  Yeah, sure it does.

So here’s the iometer run against the Transcend SSD, after about 8 hours: 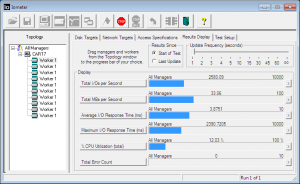 iometer reports the SSD is doing about:

In usage, the tablet feels “snappier”.  I like it.

You’ll have to decide is $200 is worth making your old laptop faster.  If it’s some old beloved model that you can’t bear to part with, then maybe it is.

Replacing a Motherboard in a NetApp FAS 3140 Storage System

One Reply to “Will a cheap solid state disk make your old laptop faster? Yes.”